With the first successfully 3D-printed firearm making news, along with the story of a breathing impaired 3-month-old child who was saved by a biodegradable splint made within 24 hours, 3D printing has become a hot topic that has shoved its way into the forefront of our attention. One of the biggest reasons for the publicity surrounding 3D printing is that it is still rather new to us – most people have little knowledge of the purpose, practicality, process, and capabilities of 3D printing. This curiosity is only exacerbated by the fact that 3D printing is already quite complicated and exacting, which makes it challenging for 3D print shops to market this new process to consumers. These unknowns have prompted many people in the manufacturing industry to ask, “What is the difference between a 3D printer and the CNC router?”

The first major difference is that the CNC router and the 3D printer have opposite processes – CNC machining works by taking a material mass and subtracting from it to create a unique part versus 3D printing works from building up materials from nothing to build apart. CNC routers work by using computer-aided design software (CAD) to create a blueprint of a particular part and then proceed with creating that blueprinted part by using computer-aided manufacturing software (CAM) to cut away at a portion of material. This process, simply put, is subtractive where the finished result is a refined part that is comprised of less material then it had in its unrefined state. The 3D printer is different in that it works in the opposite direction. Although the 3D printer similarly uses CAD and CAM software to map and create its products, it creates them differently through an additive process. Instead of starting with more material and cutting it away, it creates parts by adding layers of material until the end product is formed.

The 3D printer is a relatively new concept which hasn’t been utilized to its full potential yet, so the capabilities of the 3D printer are still being explored; however, it is still becoming evidently clear that although the 3D printer and CNC router appear to do similar things, they are going to have different commercial purposes and ultimately different markets. The CNC router is a significant industrial tool for large scale and scalable mass production. It can create large dense products for high tech machinery with great efficiency. 3D printers, on the other hand, are more suited for domestic, creative and medical purposes with rapid prototyping. Without the scalability of being able to produce a large quantity of products at a time, printers are lending themselves to individually-produced items, which is ideal for the customized consumer industry. They give consumers less of what they need and more of what they want. They can create small industrial parts but its inability to mass-produce means it’s better for personal domestic creativity, and household desires, such as unique gifts, custom iPhone cases, art pieces and more.

Whereas the CNC router is relied upon heavily by the aerospace, automotive and other industries for its ability to manufacture heavy material with high precision, the 3D printer has substantial limitations in creating multi-material parts and cannot layer denser materials. For the 3D printer, the additive layering process is fickle and underdeveloped, making it complex for a single material product, and nearly impossible to produce an item that requires more than one material type within its construction. While it has moderate prototyping functionality with plastic, it has yet to show any capacity for denser metals or heavier materials. The CNC router however, has heat management systems and a powerful servo mechanism equipped to deal with heavy dense materials that the 3D printer cannot handle.

The 3D printer at this stage cannot create any product bigger than a mini fridge, and even that product takes the 3D printer a few days to complete. The layering process is not meant for the creation of large products, which is a huge advantage for CNC routers. The 3D printer primarily succeeds on the layering of smaller simpler designs. The CNC router is a powerhouse industrial tool that has the capacity to produce the largest of parts such as those needed for aviation, nautical, construction, and automotive.

For the industries that the CNC router serves, one of the most distinguishing differences between these two machine types is their quality and tolerance sensitivities. Whereas 3D printers are breaking into smaller markets with custom items, the products still require some form of hand finishing after production, making 3D printers less efficient than CNC machines. The refinement element is missing in 3D print production, along with the tolerance for creating very specific and accurate products. Highly-detailed products that require a very high tolerance for accuracy is the expertise of a specialized CNC router, like those made by US-based designer & manufacturer Diversified Machine Systems (DMS). While there are some similarities between the 3D printer and CNC router, they will serve different purposes in their processes, production capacities, material loads, product sizes and refinement abilities.

Save thousands by purchasing a ready-to-ship machine direct from our factory floor. Shop our inventory here and inquire quickly as inventory and availability changes frequently! 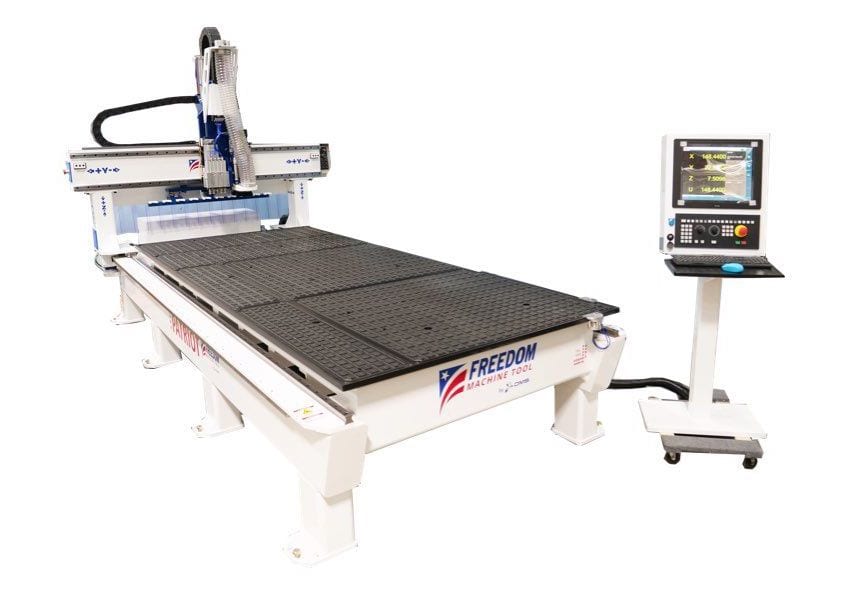